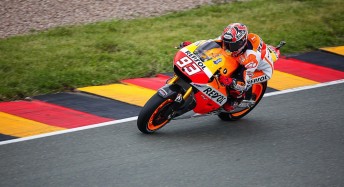 Marc Marquez will start the MotoGP German Grand Prix from pole after snatching the position from Honda-team mate Dani Pedrosa in an eventful qualifying session at the Sachsenring.

The reigning world champion capitalised on a fall from Pedrosa who had held provisional pole for towards the end of the session.

Pedrosa fell on his final run at Turn 1 and in a cruel twist of fate his team-mate usurped him at the top of the time sheets as his final effort proved enough to grab pole position by two tenths of a second.

Despite the fall, Pedrosa will line up in second on the grid with local rider Stefan Bradl third on the LCR Honda just four tenths adrift of Marquez’s leading time.

Forward Yamaha’s Aleix Espargaro proved to be the quickest Yamaha in fourth as he converted his impressive free practice pace in qualifying.

Double world champion Jorge Lorenzo was fifth just ahead of team-mate Valentino Rossi, who agreed a new two-year deal with the Japanese marque this week.

Andrea Iannone was the top Ducati in seventh with the Italian joined on row three by the Monster Yamaha duo of Pol Espargaro and Bradley Smith.

The top works Ducati was Andrea Dovizioso who could only manage to post a time good enough 11th position behind Gresini Honda’s Alvaro Bautista.