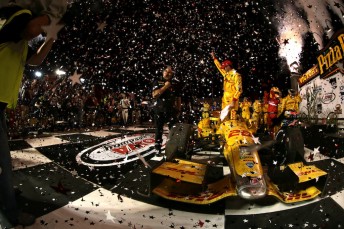 Ryan Hunter-Reay reversed a horror run since winning the Indy 500 by claiming an unlikely victory in the Iowa Corn Indy 300.

Hunter-Reay loomed up to Tony Kanaan, who had led 247 laps of 300, to take the lead with two laps remaining in a grandstand finish as a bold move to take fresh tyres with 16 laps remaining struck pay dirt.

The race was restarted with nine laps to go with Kanaan leading his Ganassi team-mate Scott Dixon who eventually finished fourth.

“It was like a video game at the end, just threading through it,” Hunter-Reay said. “The thing was on rails at the end.”

“We stole it today but I’ll take it any way we can get it,” Andretti said.

“What’s really weird is that we talked about it before the race – with 15 laps to go and a yellow comes out what are we going to do.

“When we talked about it we said we should think about pitting.”

Penske drivers Helio Castroneves and Will Power were third and fourth on the restart but eventually would finish eighth and 14th with the Brazilian taking the lead in the points by 9 from the Australian.

Ganassi driver Ryan Briscoe was in the mix on the final restart but also faded to finish ninth in the final scramble for positions.

Earlier polesitter Dixon dropped back to fourth after 20 laps as Kanaan, Castroneves and Briscoe headed the race.

With drivers mindful the race could be called early before the dark clouds cleared, it was a full blooded sprint from the start with Hunter-Reay making eight positions while last year’s Iowa winner James Hinchcliffe made up six to be in eighth.

Officials red flagged proceedings on lap 39 as the rain increased.

After 26 minute delay the race was restarted under caution with Kanaan and Castroneves leading the field into the pits with the Penske driver winning the race off pit road. 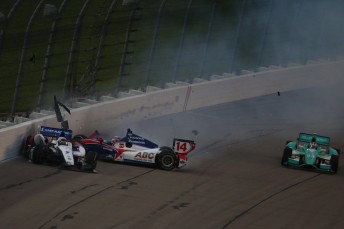 When the race went green on lap 48 Takuma Sato and Mikhail Aleshin crashed with the Russian losing control by himself at the rear of the field and drawing the Japanese driver into the accident.

“I think the officials need to come down on this crap. It’s not racing no more, it’s who can survive the crash,” Sato’s fired up team owner AJ Foyt blasted.

On the restart on lap 64 from the second caution period, Castroneves maintained station at the front from Kanaan and Dixon with Power lurking in fourth place.

By lap 77 and with threatening weather clearing, Kanaan shot past Castroneves for the lead as traffic played a hand in the lead change.

Pocono winner Juan Pablo Montoya managed to slice his way into the top 10 from his 19th starting position but his efforts were savaged when part of his rear wing end plate peeled off, bringing out a third yellow by lap 90 for debris.

The leaders pitted with Kanaan coming off pit road in front of Castroneves with Power making up a position into third as Briscoe and Dixon were fourth and fifth.

Soon after the restart Briscoe slipped past Power for third with Ganassi and Penske drivers clutching the leading four positions.

The flying Sebastian Saavedra (KV AFS Racing) shot into third place but slid into the wall bringing out a fourth caution period on lap 160.

In the ensuing pit stops Kanaan emerged in front from Power while Carpenter moved into third place with Castroneves shuffled back to fourth.

Pagenaud came in for what would be an ill-timed final pit stop on lap 230 just as the caution waved for Marco Andretti’s engine failure.

As the race went green Montoya jumped three places during the ensuing pit stop to hold seventh with Kanaan and Dixon holding down the top positions.

However with 19 laps remaining Montoya crashed into the wall after Carpenter dived down the inside, taking the Colombian out for his first non-finish in his IndyCar comeback season.

When told later that the incident was investigated and cleared by officials with no action taken, Montoya retorted: “Then I’ll taken action later.”

The IndyCar series moves to the double-header round in Toronto next weekend.

See below for results