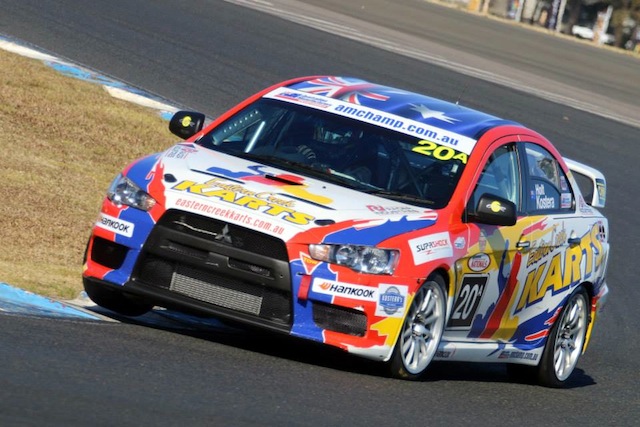 Garry Holt and Stuart Kostera will start Sunday’s Australian 4 Hour at Sydney Motorsport Park from pole position after the #20 Mitsubishi Lancer proved the class of the field in qualifying.

The second row will also be made up of a Mitsubishi and BMW, with the Aaron Seton/Glenn Seton/Bob Pearson Lancer third quickest ahead of the Tony Alford/Ryan McLeod 1M.

Sixteen-year-old Aaron Seton had set the pace during Qualifying 1 before handing over to the car’s more experienced pilots for the second hit-out.

Holt and Kostera are meanwhile hopeful that they can convert pole into a victory, turning around a season that has seen mechanical failures cripple their charge in the opening two events.

“Last year we had a very good run and went on to win our forth championship but this year it has completely gone the other way, we have been to two rounds and haven’t yet finished,” said.Holt  .

“I have got zero points on the board at the moment, so the chances of winning the championship this year are virtually zero, but it would be nice to win and finish a round this year.”

The AMChamps field is down to 16 cars following the withdrawal of Osborne Motorsport’s two Mazda 3 MPSs.

“We feel it is the right decision as we can’t be 100 percent focused on what we need to do this weekend to compete, and we believe it isn’t responsible to continue for ourselves or our fellow racers if we can’t be completely focused,” said Osborne, whose car completed practice on Friday afternoon and Saturday morning before being withdrawn.

“The team wants to thank everyone for their support this weekend, and for their continuing support of Brock.”

Ilya Harpas proved the man to beat in the Superkarts, winning the opening three races of the weekend following early mechanical problems for pole-sitter Russell Jamieson.