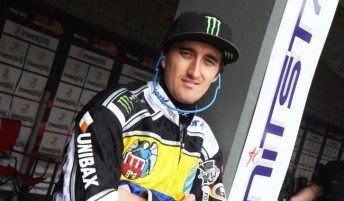 Two time British Grand Prix winner, Chris Holder has ruled himself out of competing in Speedway Grand Prix’s biggest event due to the wrist injury he suffered three weeks ago.

The 2012 World Champion has been the standout rider at Cardiff’s Millennium Stadium over recent years, winning his first Speedway Grand Prix in 2010 and then going on to win again in his Championship year.

He was aiming to join Championship combatant, Greg Hancock as a three-time British Grand Prix winner this weekend – Hancock having won in the first year of the Grand Prix era (1995) and again in 2004 and 2011.

It is a cruel blow for Holder’s Championship chances in 2014. He will more than likely be bumped out of the top eight riders on the Grand Prix ladder this weekend – he current sits seventh.

Holder will be replaced by young Danish sensation Michael Jepsen Jensen who rode in the Sydney-sider’s position at the Danish Grand Prix two weeks ago.

Australian hopes for the event rest with Troy Batchelor and Darcy Ward. Batchelor stunned the World Championship community with his virtually flawless performance at the PARKEN Stadium in Denmark – dropping just a single point. Sadly, that point being in the Final. The Millennium Stadium is a very similar proposition to Denmark – a temporary track built specifically for the event, which bodes well for the Queenslander.

Ward is looking to maintain his position in the eight after battling injury for most of the season.

The British Grand Prix has been a happy hunting ground for Australians in the past, with Jason Crump winning five (1996, 1998, 2006, 2008, 2009) and South Australian Ryan Sullivan tasting victory in 2002. Holder’s two wins sees Australians having won eight of the 19 SGP’s held in Great Britain.