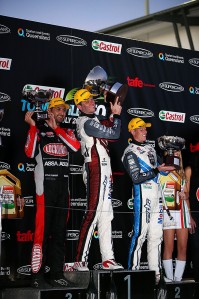 Castrol EDGE V8 Predictor team Lockwood 14 has taken round honours for the Castrol Townsville 500 round scoring themselves a $100 BP fuel card.

The Lockwood 14 team’s massive 105 points haul came with a prediction accuracy of 48% after they took full advantage of the new-to-2014 bonus points system and collected an additional 80 bonus points.

In the overall league standings team Arne’s Mob has maintained the lead with Team Murph taking over SCATTERS who slips back to third overall after sitting second in the standings heading into the round.

The overall drivers’ points winner for the weekend went to the Holden Racing Team’s Garth Tander after his win and two second places for the weekend.

In the Experts’ league Speedcafe.com took out round honours with 22 points for the North Queensland-based event.

Andy Priaulx was second on 17 points while Greg Rust managed 14 points. Speedcafe.com continues to lead the race amongst the Expert predictors.

Round 8 of the V8 Supercars Championship takes crews to Queensland Raceway for the Coates Hire Ipswich 400 – Aug 1-3.