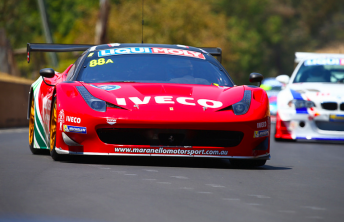 Maranello took a memorable victory in the 2014 Bathurst 12 Hour

Reigning Bathurst 12 Hour winners Maranello Motorsport have been announced as the first entry for the 2015 event.

While Lowndes appears unlikely to return to the race due to a date clash with V8 Supercars’ pre-season test day, Maranello hopes that Salo and Bowe will both return.

“Winning at Bathurst is tough but defending a victory is even tougher,” he said.

“We want to showcase our teams’ abilities by coming back and aiming to win the race again.

“Based on the interest we are getting out of Europe, there is no doubt that there are a lot of teams who want to come down and join the race next year and it’s already clear that it will be even harder to defend our victory than it was to win the first one.

“There are a lot of factory Ferrari drivers lining up to come and drive, and they are just the start.”

Coffey is expected to travel with Lowndes to the Spa 24 Hour later this month, where the V8 Supercars regular will line-up alongside fellow Australian Steven Wyatt and Italian Michele Rugolo in a Pro-Am Class Ferrari 458.

Wyatt and Rugolo were both part of AF Corse’s ill-fated campaign on February’s Bathurst 12 Hour, which saw the former crash heavily in both practice and qualifying, after which the car was withdrawn.