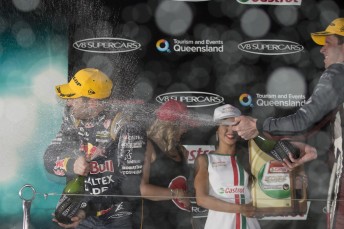 Jamie Whincup has admitted that his fitness was put under the microscope during the 250km feature race at the Castrol Townsville 500.

Whincup was told to deliver banzai laps for the majority of the 88-lap affair.

Red Bull had orchestrated a different strategy to arch rivals Garth Tander and James Courtney in the #2 and #22 Holden Racing Team Commodores.

It forced Whincup to work overtime to stay within reach of Tander, whom he eventually overhauled later in the race to claim the Brisbane squad’s first Sunday win of the year.

“I feel like I did a reasonable job behind the wheel. It was qualy lap after qualy lap trying to chase car #2 down,” Whincup said of his successful pursuit.

Whincup confessed that an all-out qualifying scramble over the last 10 laps could have found him wanting physically.

“The boys were saying push, push, push … and 20 laps in I’m pretty knackered already,” he said.

“I didn’t think I could keep it up for 80 or so laps so thankfully the last 10 laps weren’t as crazy.

“It would have been tough to get to the end.

“I’ll work on my fitness. I don’t do too much so I’ll try to step it up in the next two months,” the 31-year-old added with a wry tone.

Amid the niggle between the HRT and Red Bull in Townsville, Tander offered a dig about fitness.

“From a fitness point of view, I’m not sure what the young blokes are doing,” Tander said.

“I’m 37 and I train every day and I feel great so make the races longer, no problems.”

The HRT decided to dissect the 88-lap affair into two long stints for the 2007 V8 Supercars champion.

“We had to commit to two very, very long stints so that meant we were always going to be a bit vulnerable at the end,” Tander said.

“But we were still 20 seconds ahead of the next car behind us so it was a very strong race for us.”

The weekend was a major boost to Whincup’s pursuit of a record sixth V8 Supercars Championship title.