Spa 24 a reset for Lowndes after shocker

Spa 24 a reset for Lowndes after shocker 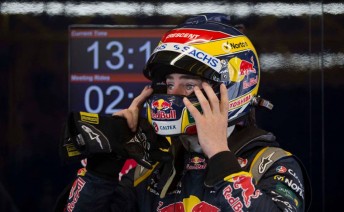 Racing in the upcoming Spa 24 Hours will provide a mid-season reset for Craig Lowndes after a horror Castrol Townsville 500 that has severely dented his V8 Supercars title tilt.

The 40-year-old admits it will be “bloody hard” to win a fourth V8 Supercars Championship this year following Townsville, where incidents on Saturday and an engine problem on Sunday scuttled his charge.

Lowndes dropped from second to sixth in the standings over the course of the weekend and is now a full 282 points behind leader Mark Winterbottom.

“I’m not even worried about the championship to be honest now,” Lowndes, who also endured a tough run at the previous event in Darwin, told Speedcafe.com.

“I’m just focussed on winning races and doing the best we can, because I think that it’s going to be a long shot from where we are.

“Points-wise we’re still in it, but we’re going to have to have all the guys in front of us have problems.

Lowndes will compete in an AF Corse Ferrari 458 at Spa, which follows on from his victorious assault on February’s Bathurst 12 Hour in a Maranello Motorsport Ferrari.

“It (racing at Spa) will be a good change,” said Lowndes of the July 23-27 event coinciding with his V8 Supercars misfortune.

“I think any time you get your head out of this world (V8 Supercars) and go and do something else it’s good in the sense that it clears the mist a bit and you can get on with making good judgements in this category.”

Lowndes will fly out of Australia on Saturday, heading for Austria.

“We’re going to Salzburg (Austria) and catching up with the head office of Red Bull,” said Lowndes, who will miss a Red Bull V8 Supercars test day at Queensland Raceway while he is overseas.

“That’s something we haven’t done and it’s a great opportunity to do that.

“We’ll meet everyone and try and do a bit of training over there before heading to Belgium.

“There’s going to be a nice little Aussie group over there for the race, including Richo (Lowndes’ V8 Supercars co-driver, who is racing Australian Roger Lago’s Lamborghini alongside fellow Australians David Russell and Steve Owen).

“For me the while thing will be a huge experience because I’ve never done any more than 12 hours of racing.

“I’m going to be really excited to see how it goes. Everyone says they’re tough, but I’ll find out in a couple of weeks time.”