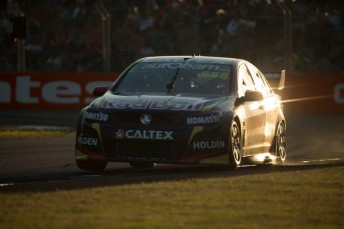 Red Bull’s Craig Lowndes has ridden the peaks and troughs of a torrid 2014 V8 Supercars Championship.

After setting the pace early in the season, Lowndes found himself second on points going into the Castrol Townsville 500 before ending the weekend slipping back to sixth, 282 points behind leader Mark Winterbottom.

Lowndes was stripped of 25 points following his loose start to the opening sprint race with stewards further dishing out a two-place grid penalty.

The veteran tried to turn around his weekend in the 250km race but after starting from third (after claiming pole in the shootout) he encountered crippling overheating problems in the #888 Holden.

Attempts to claim what would be a fourth championship success and the first since 1999 have now taken a turn for the worse.

But with six events remaining, there remains plenty of chances for the championship to ebb and flow ahead of the final race at Sydney Olympic Park in December.

What do you think? Can Lowndes stage what would be a remarkable fightback to take the 2014 championship?

Have your say in the poll below.