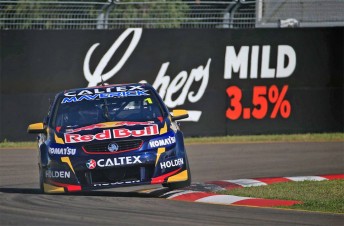 Jamie Whincup was too strong in Race 22

Jamie Whincup continued to close in on the V8 Supercars Championship lead with an impressive victory in the final race of the Castrol Townsville 500.

The Red Bull Holden driver spent much of the 250km Race 22 locked in a battle with Garth Tander, despite rarely seeing his opponent on the road until the final stint.

Whincup was one of just six drivers to elect against taking his first pitstop under Safety Car on the opening lap.

The strategy saw Whincup push hard to gap the field during his opening two stints and ensure that he rejoined from his final stop just five seconds behind Tander, who led those on the opposing plan.

With 15 lap fresher tyres, it took less than 10 laps for Whincup to catch and pass his rival, ensuring that the Red Bull driver could cruise home over the final run to the flag.

Tander, who had made minor contact with Whincup during their brief battle, finished second ahead of a charging Shane van Gisbergen. 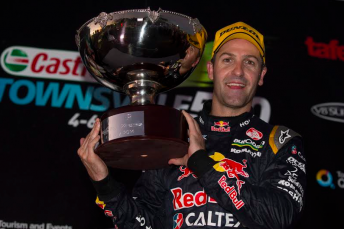 Jamie Whincup with the Race 22 trophy

Like Tander, Van Gisbergen elected to pit on the opening lap, but was later switched to a three stop strategy that meant he had to come from behind in the closing stages.

James Courtney and Nick Percat finished fourth and fifth after both losing places to Van Gisbergen over the final 10 laps.

Championship leader Mark Winterbottom limited the points damage by driving from 11th on the grid to sixth on what was a disappointing weekend for Ford Performance Racing.

Fellow FPR drivers Chaz Mostert and David Reynolds were seventh and 12th respectively after punctures forced them into three-stop schedules.

Scott Pye scored a solid eighth for Dick Johnson Racing while Scott McLaughlin and Will Davison completed the top 10.

McLaughlin and Davison followed the same strategy as Whincup, but finished over 35s adrift of the winner, such was the Holden driver’s pace.

It was a disastrous race for Whincup’s team-mate Craig Lowndes, who ended up completing eight pitstops on the way to 23rd due to an overheating engine.

The #888 Holden will also be the subject of a post-race investigation after an early pitstop infringement.

Pole-man Jason Bright finished 17th after a drive-through penalty for spinning his rear wheels in his opening lap pitstop.

Team-mate Dale Wood and FPR’s Jack Perkins were the race’s only retirements after crashing out on the opening corner.

Winterbottom now leads the championship by 94 points over Whincup, with Fabian Coulthard a further 177 further adrift in third.

Lowndes drops behind Courtney and Van Gisbergen to sixth, 282 points behind Winterbottom.