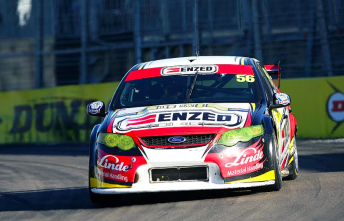 Cameron Waters took his second pole of the weekend

Cameron Waters and Ashley Walsh will resume their Dunlop Series battle from the front-row of the grid when Race 2 gets underway this afternoon in Townsville.

Waters punted his rival from the lead of Saturday’s opening encounter on the final corner of the race, which yielded a 30 second post-race penalty for the Ford Performance Racing driver.

The Race 2 qualifying session saw Waters record a best of 1:13.75s to edge his rival by just 0.0242s and take his second pole of the weekend.

Paul Dumbrell put his Eggleston Holden on the outside of the second row ahead of Race 1 winner and fellow Holden driver Chris Pither.

The Dunlop field has been reduced to 29 today following the withdrawal of Dragon Motorsport’s Tim Macrow-driven entry, which suffered rear damage in Race 1.

The second 29 lap Dunlop Series encounter will get underway at 1315.

See below for full qualifying results for Race 2