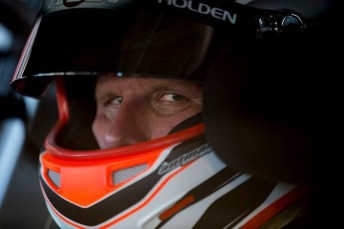 Tander has intimated that more intense on-track feuding is a strong possibility following the Castrol Townsville 500, where the factory squad continued to show signs that it is heading back to its glory days.

Following an incident on the opening lap of the first sprint race when Craig Lowndes put aggressive moves on both Tander and his the HRT partner James Courtney, Tander has flagged a stern warning at Roland Dane’s Red Bull squad.

On fading tyres, Tander was hauled in at a rapid rate in the 250km main race by Jamie Whincup.

Tander did not exactly roll out the welcome mat, however, nudging into the back of the Red Bull entry after the five-time champion had found a way by.

Tander later described the contact as a “message” for Whincup and Dane.

“His (Whincup’s) speed at that stage of the race, there was something like 18 laps to go … he was always going to pass me,” Tander explained.

“Not so much for today but for the future when I’ve got a car capable of fighting to the death with I will continue to fight.

“I kept the fight up for as long as I could.

“We knew what the end result was going to be but I just wanted to send a small message to him and his team boss that I’m not forgotten about yet.”

When asked why he would want to send a message to Dane, Tander added: “Into Turn 1 and Turn 2 yesterday one of his (Dane’s) cars wanted to send us a message that’s all.”

The threatening words are expected to escalate an already robust rivalry between the two Holden outfits.