Sykes on a charge with Portimao pole

Sykes on a charge with Portimao pole 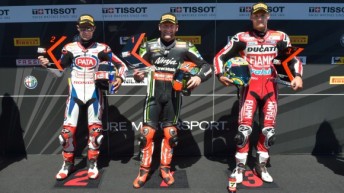 The Kawasaki rider saved his best until the final moments of the session at the Portimao circuit posting a 1.42.484s effort which was good enough for his 22nd pole of his career.

Pata Honda’s Jonathan Rea trailed Sykes by three tenths to line up in second while Ducati’s Chaz Davies completed an all British front row in third.

The session proved to be hard fought with Rea, Loris Baz and Sylvain Guintoli all enjoying spells at the top of the timesheets before Sykes struck.

Marco Melandri will start from fourth with the Italian joined on the second row by Baz and Guintoli as the trio were covered by less than a tenth of a second.

The second Pata Honda of Leon Haslam claimed ninth on the grid while EVO rider Sylvain Barrier rounded out the top 10.

Sykes holds a 39 point lead over Guintoli heading into this weekend’s meeting at Portimao.