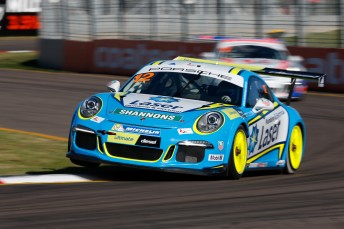 Richards is now tied for the points lead in Carrera Cup

Steven Richards has broken through for his first overall round win in the Carrera Cup with a sweep of both of the Sunday races in Townsville.

In what was his 26th overall round start, he had been a 7-time second place overall finisher, but that is now behind the ever-versatile Richards.

In the day’s opening race Richards slotted into second place off the start behind Race 1 winner Michael Patrizi.

Then on just the second lap Patrizi locked a brake, before running down an escape road on the very next corner.

Richards then took control at the point from championship leader Warren Luff with Shae Davies in third.

In the final race of the weekend Richards once again won the start to lead Luff.

The race appeared to settle down before with just three laps to run Davies tried to go down on the inside of Luff. He locked the rears and made heavy contact with the front-right of his McElrea Racing team-mate. Luff had to retire, while Davies took a drive through penalty to finish 11th for the race.

There were no such dramas for Richards who won the race ahead of Craig Baird and Sam Power.

The result is not only Richards first overall round win; he is also tied for the points lead with Luff.

After Roger Lago finished first in the Elite division in the opening race, Stephen Grove took both the Sunday races to take the round.

The Carrera Cup next goes racing with the V8 at Sydney Motorsport Park in August.

VIDEO: Richards and Grove speak after the final race in Townsville