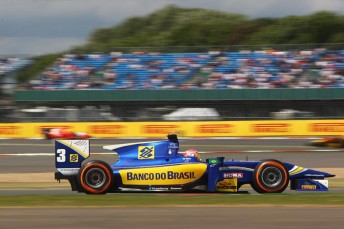 Felipe Nasr closed the gap to GP2 championship leader Jolyon Palmer as he won the Silverstone sprint race while Kiwi Mitch Evans ended his weekend with another points finish.

The Williams F1 test driver made the most of his front row starting berth as he swept into the lead on the opening lap before going on to dominate the race.

Stefano Colletti finished 4.3 seconds behind the Carlin driver while Johnny Cecotto Jr claimed the final place on the podium.

Nasr shot into the lead at the start while Richelmi dropped to fourth after a slow getaway.

Evans also made a bright start as he jumped ahead of DAMS driver Jolyon Palmer briefly before falling back behind him in seventh position.

However, there was no stopping Brazilian out in front as he surged to a comfortable victory from Coletti, Cecotto and Palmer.

Auckland racer Evans pushed hard throughout the race but he was unable to pass Richelmi despite several attempts and had to settle for seventh at the chequered flag.

Palmer continues to lead the championship by 38 points from Nasr.

After backing up his maiden GP2 victory with another points finish, Evans has moved to fourth in the standings ahead of round six at Germany’s Hockenheim circuit on July 18-20.