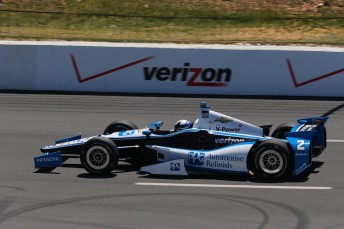 Juan Montoya reset lap records to claim pole position at the unique Pocono tri-oval ahead of the 11th round of the Verizon IndyCar Series.

The final car to go off on its single-car qualifications, Montoya surged to the 15th IndyCar pole of his career which has been revived for a second time through Team Penske this season.

The Colombian’s team-mate and points leader Will Power was second fastest while another Colombian, Carlos Munoz (Andretti Autosport) completes the front-row after clocking the third fastest time.

“It’s the luck of the draw, but the big thing was we had good balance,” said Montoya, who has a good deal of NASCAR experience at Pocono.

“Am I back? Well, I’m getting there. I feel like I’m getting there every week. We keep working harder and keep finding speed and more results. So it’s exciting. I think we’re going in the right direction.

“(The track is) so different (from NASCAR). We run wide open all the way around here. I think the average speed is 30 or 40 miles per hour faster than we do in a Cup car. It’s fast.”

Montoya realised his last IndyCar pole during his signature season with Chip Ganassi at the Gold Coast Indy race in 2000.