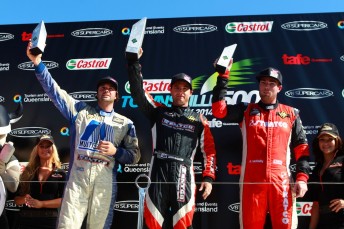 Form driver Kris Walton landed the final heat of the V8 Ute Racing Series fuelled by Hogs Breath Cafe to take round 4 of the series at Reid Park.

West Australian driver McNally led the race to the first turn to set up a thrilling dice for the balance of the race.

“McNally got us off the start, we sat there for a while behind but I was able to get him back when he made a couple of little mistakes, which made it easier for us,” Walton said.

“It’s exactly what we needed here, to grab another win, more points, the leads getting bigger, we just have to keep it up.”

Hansford and Victorian veteran fourth-placed Kim Jane did everything they could to chase down the top two.

“I didn’t’ have an answer for them (Walton & McNally), I tried my best and pushed a little too hard on the last few laps,” Hansford said.

“But congratulations to Kris and Rhys for first and second and it’s a good result for the team again.