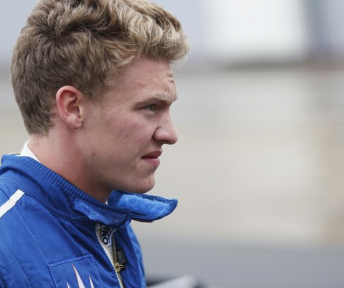 Australian single seater racer Mitch Gilbert was lucky to escape a huge shunt without serious injury on his GP3 debut at Silverstone.

The 19-year-old was ruled out of both races this weekend at the Northamptonshire circuit after flipping his Trident car on the high speed Hangar straight during a wet qualifying session.

Gilbert made contact with a slower car at one of the fastest section of the circuit resulting in his car taking flight before landing upside down on the track.

Luckily he emerged from the incident unscathed with just stitches required to his hand which had dragged along the track surface.

However, his GP3 debut has come to a premature end after being declared not fit to race, while his car suffered extensive damage ruling it out of Sunday’s race.

“It seemed like bad luck that it happened but I was quite lucky that I only cut my hand to be honest,” Gilbert told Speedcafe.

“I didn’t to expect to come across somebody going slowly on the hangar straight and with the spray you couldn’t see anything.

“I hit the car at about 230kph and then the car did a back flip and landed upside down and my hand dragged along the floor and its really cut up.

“Its been a tough couple of days.”

Gilbert, who has been competing in the FIA European Formula 3 Championship, says a decision to race in the remaining GP3 rounds has not been made, but is hoping to be on the grid at Hockenheim in two weeks time.

Aftermath of my @gp3_official qualifying. I hit a driver going 200km/h slower. Biggest crash of my entire career.1/2 pic.twitter.com/Up7GWit5bO