Courtney: Burgess not only key to HRT resurgence

Courtney: Burgess not only key to HRT resurgence 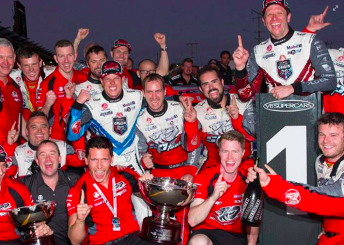 The Holden Racing Team’s rejuvenation as a tour de force reflects the newfound depth of its engineering department, according to James Courtney.

Adrian Burgess has overseen a new engineering group in a major reshuffle at the Walkinshaw Racing operation with the changes starting to strike paydirt.

However Courtney has tried to attribute the turnaround away from Burgess, who helped steer him to his only V8 Supercars title when the pair were part of Dick Johnson Racing in 2010.

Long-standing the HRT driver Garth Tander led home Courtney to a one-two in Race 21 at the Castrol Townsville 500.

“We are turning it around,” Courtney said.

“I don’t think you can solely point the finger at Burgess as much as he’d like to take the credit. His head is big enough!

“Alex Somerset has been a big asset and also getting Techo (Matt Nilsson) back. Its just a really good buzz.

“It was a great day for the team as everyone can see is heading in the right direction.

“It’s a great atmosphere,” he continued.

“Those boys have been working their arses off. To be able to repay them with a one-two is fantastic.”

Tander stopped short of saying the Holden factory squad had reached the peak of its form turnaround, saying there are more improvements to be phased into both Commodores in the coming Events.

“Every time you go the racetrack you look to have a win,” said Tander, who broke a 24 race winless streak with his Saturday success in Townsville.

“At the moment we are still having to drive the car a little bit too hard to get a lap time out of it.”