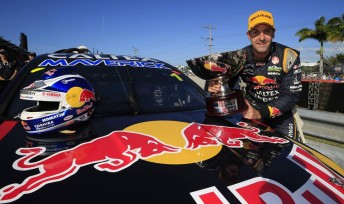 Jamie Whincup cut through from 10th on the grid to take victory in an incident-packed opening race at the Castrol Townsville 500.

The win is Whincup’s third in four races and sees him climb to second in the championship standings, 147 behind Mark Winterbottom.

“I was able to just keep it clean and come through,” said Whincup post-race.

“I don’t know if I’ll be that lucky starting 10th again in the second one though.”

That allowed McLaughlin to sweep into the lead from Jason Bright, Courtney and Lowndes.

Lowndes then saw his race fall apart as a dive-bomb on Courtney later in the lap slowed both drivers and soon saw the Red Bull Holden spun into the Turn 12 exit wall by Will Davison.

Lowndes later returned to the track hoping to score points, but crashed heavily at Turn 5 after an apparent failure. 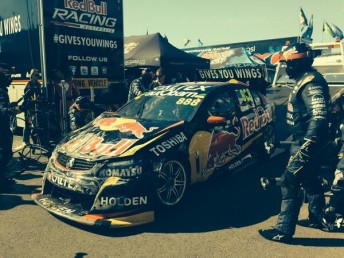 McLaughlin led the way until pitting under a Lowndes-induced Safety Car on Lap 12 of 44, which completed the cycle of compulsory pitstops.

The Volvo rejoined behind Whincup, allowing the Red Bull driver to control the race for the duration.

McLaughlin held down second until losing out to Tander on a second Safety Car resumption with just 10 laps remaining.

Tander had fallen as low as sixth part-way through the chaotic opening lap, before losing further time when he was turned around by Bright towards the end of the first stints.

The battle for the podium had one final twist as Davison muscled through on McLaughlin in the dying laps to secure his first top three finish for Erebus Motorsport.

Points leader Mark Winterbottom meanwhile salvaged 11th from his 17th placed grid slot, with team-mate Chaz Mostert 13th despite being turned around on the opening lap.

The second Safety Car had been caused by a collision between Jack Perkins and Todd Kelly that saw the former’s Jeld-Wen Ford make heavy contact with the inside wall between Turns 2 and 3.

The second 125km race of the day will get underway at 1650 local time.

See below for full Race 20 results