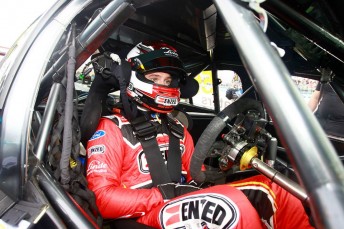 Cameron Waters took pole position for Race 1 of the Dunlop Series in Townsville by bumping Ash Walsh from the top spot in the dying stages of qualifying.

Walsh had set a benchmark of 1:14.52s on his first flying lap of the upper 50 percent session that stood until the chequered flag fell.

Waters, electing to do just one run in the 15 minutes, lost time with small mistakes on his first two laps before backing off and then rebounding with a 1:14.43s.

The Eggleston Motorsport Holdens of Paul Dumbrell, Garry Jacobson and Ant Pedersen will start third, fourth and sixth respectively after their best laps all fell within 0.2s of one another.

Brad Jones Racing’s Chris Pither and Andrew Jones recorded the fifth and seventh best times, while the squad’s third car will start 19th in the hands of debutant Macauley Jones.

The Formula Ford graduate had been fourth fastest of the lower 50 percent runners behind Morgan Haber, Josh Kean and Marcus Zukanovic.

The opening Dunlop Series race of the weekend will kick-off at 1530.