Van Gisbergen back on top ahead of qualifying

Van Gisbergen back on top ahead of qualifying 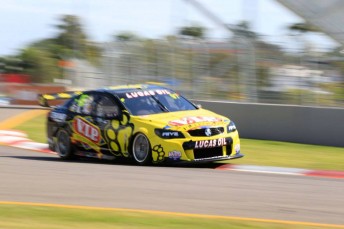 Shane van Gisbergen returned to the top of the time sheets in the fourth and final practice session of the weekend in Townsville.

The Tekno Holden driver wasted little time in getting up to speed, lapping quicker than Lee Holdsworth’s Friday best on just his second flying lap.

The Kiwi’s 1:13.64s lap held down the top spot before fellow Holden drivers Tim Slade and Jamie Whincup both improved the benchmark during the mid-part of the session.

Van Gisbergen, who had topped the opening two sessions yesterday, then returned serve on his final lap, leaving the fastest time at 1:13.25s.

“It’s all down to me now to get the best out of it in qualifying.”

A late effort from James Courtney put the #22 Holden Racing Team Commodore between the Tekno and Red Bull entries.

Tim Slade and Jason Bright made it a Holden sweep of the top five, while Scott McLaughlin Fabain Coulthard, Nick Percat, Garth Tander and Todd Kelly completed the top 10.

Friday pace-setters Erebus were also down the order, ending up 12th and 20th.

Back-to-back 10 minute qualifying sessions to set the grids for Races 20 and 21 will get underway from 1140 local time.