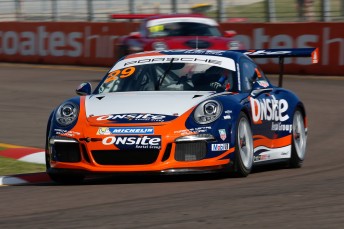 Michael Patrtizi has taken pole position for the opening race of the Carrera Cup after an early morning qualifying session on the streets of Townsville.

Patrizi is using a new body shell this weekend after a heavy crash at the mini-enduro event at Phillip Island for co-driver and former World Superbike star Troy Bayliss.

The cool morning conditions were a contrast to yesterday practice sessions which finished with Craig Baird fastest.

Patrizi made the most of his opportunities, including good clear laps, to share the front row with championship leader Warren Luff.

Baird will have his work cut out for him back in eighth. Just in front is Steven Richards who while chasing a fast time had a spin late in the session.

Stephen Grove, who won the Phillip Island event overall with Scott McLaughlin, was fastest of the Elite runners after Roger Lago lost his fastest time for a blend-line infraction.

The first race of the weekend will be run at 11am.