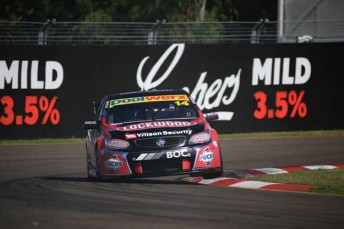 James Courtney and Fabian Coulthard shared the pole positions in a typically tight pair of 10 minute qualifying sessions in Townsville.

Courtney led a Holden Racing Team one-two in the first session, which set the grid for Race 20.

Practice fast-man Shane van Gisbergen had looked on course for pole before dropping to sixth as he sat in pitlane over the final minutes.

Seventh through 10th was filled by Tim Slade, Will Davison, Nick Percat and Jamie Whincup.

Percat and Davison both shone in the second session, with the former shooting to the top of the order as the chequered flag flew.

Coulthard denied the youngster a first career pole however, with the Lockwood Holden edging the HHA entry by 0.05s.

Coulthard had earlier managed just 14th in the Race 20 session.

“We had to have a bit of a turnaround in the first one where we were unlucky not to have a second lap on our set of tyres,” said the Kiwi afterwards.

“We just had to tighten the belts and go racing.”

Ford Performance Racing’s four Falcons struggled in both sessions, failing to put a car in the top 10 of either hit-out.

See below qualifying for Race 20

See below qualifying for Race 21