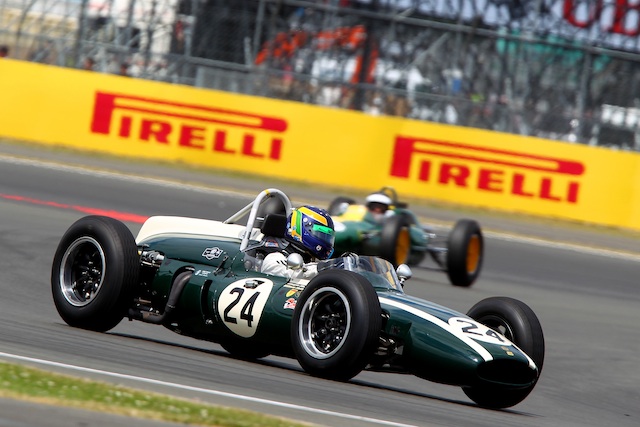 Silverstone honoured the achievements of the late Sir Jack Brabham as the circuit celebrated its 50th British Grand Prix with a special parade.

The Northamptonshire circuit organised a group of iconic cars and drivers spanning the last 50 years to commemorate the milestone by completing laps around the venue.

To mark Brabham’s 1960 British Grand Prix win at the circuit, his youngest son David Brabham got behind the wheel of the Cooper Climax that his three-time world champion father drove to victory.

Sir Jack Brabham won his first world title in 1959 before going on to defend the crown the following year. He won his last world championship in 1966 where he drove a car of his own construction, a feat unlikely to ever be achieved again.

David was joined in the parade by a host of the sports icons, including four-time world champion Alain Prost, Jackie Stewart, Damon Hill, Emerson Fittipaldi and Nigel Mansell.

“Whenever you get an opportunity to drive something my father raced back in that era is very special,” Brabham told Speedcafe.

“Silverstone is one of those great iconic race tracks.

“Doing the parade in dad’s old car and also with all the other drivers around me was amazing.

“Its a great little car and I wished we weren’t restricted on the parade as I would like to have a proper go in it.”

“I’ve been totally blown away by the messages received since his passing.

“I always felt dad was underrated in a sense.

“Whenever people give their top 10 F1 race drivers its very rare for his name to be mentioned, but I think even I have under estimated the level of respect that he had built up.

“Of course when he passed away the news went right around the world and everyone gravitated to what he achieved.”