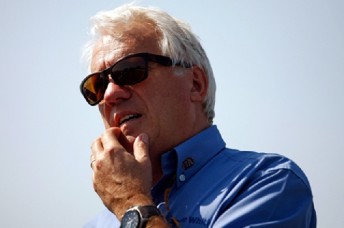 Formula 1 drivers have already aired their concerns over the fairness and the safety aspects of the new rule, which will see cars form up on the grid for a standing start after Safety Car periods.

The adoption of the rule has sparked widespread criticism from both fans and drivers with the latter concerned the new format is unfair for race leaders, while posing added safety risks.

However, in a press conference regarding the sport’s new regulations, Whiting said the FIA will allay fears over the new rule and is confident it will not add any extra safety risk.

“First of all this rule was a suggestion from a team and I put it to all the teams and they all agreed and I have rarely seen such enthusiasm for a new idea,” said Whiting.

“It is not without its difficulties. The idea of it is that the start is the most exciting part of the race.

“The teams are 100 percent behind it and I have heard some drivers expressed concerns but I believe we can allay those fears.

“Two things drivers are concerned about ware fairness and safety due to starts on worn tyres.

“This means if a car is on worn tyres they are likely to pit as they want to take the advantage of a free pit stop. They all do it now anyway and it will continue to happen.

“I think the chance of a car going to a restart on worn tyres will be low.

“I don’t believe there is any added risk in terms of safety.

“Of course you are more likely to have an incident at standing start but no driver wants that to happen and no driver will cause it to happen.”

Whiting also confirmed that the FIA is continuing to work on improving the noise of the cars and are working on a new solution.

The F1 race director revealed the FIA are evaluating the use of a new split exhaust which has been tested on a engine behind closed doors.

“What they have found is by splitting the exhaust into two tailpipes there is more noise produced. It would appear it works to some extent,” added Whiting.

“The next step is to look at the feasibility of doing it because if you put something like this on the car it will interfere with wings and other parts of the car.

“All those things would have to be re-engineered potentially so it is not a straight forward job.”

The FIA has no plans to hold a sparks test with the newly designed titanium skid blocks in the near future according to Whiting.

The new skid blocks have been created to increase the amount sparks in a bid to aid the viewing experience. The new parts were tested by Nico Rosberg during practice for the Austrian GP.