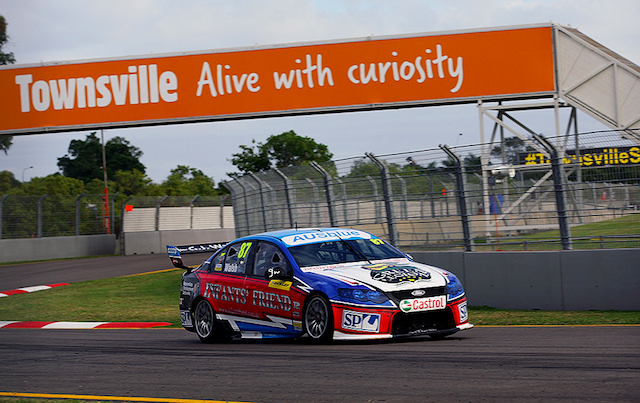 Dunlop Series points leader Ashley Walsh set the pace in practice for the fourth round of the season in Townsville.

The Matt Stone Racing Ford was quickest in both 30 minute sessions, improving his morning best by an even second to 1:14.33s in the afternoon.

Ford Performance Racing’s Cameron Waters was second on both occasions, ending the day 0.24s adrift of Walsh, who is expecting a tight qualifying battle in the morning.

“The car is really good on the worn tyres but we struggled a bit for balance with the new set,” noted Walsh post-session.

“It gives us room to improve overnight. I’m sure everyone else will so it will be a tough fight for pole position.

“Qualifying is critical here and there is definitely time left in the car. The fight at the front will be very intense.”

The MW Motorsport Falcon of Dean Fiore was third in Practice 2 ahead of Holden drivers Andrew Jones and Garry Jacobson.

Steven Johnson improved from eighth in the first session to be sixth at day’s end on his debut in the second-tier series with MSR.

The Dunlop Series competitors will return to the track for the class’ two-part qualifying session from 0845 local time tomorrow.