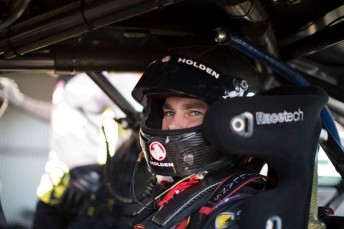 Just a week after settling an 18 month legal dispute over his move to Tekno, the Kiwi made the most of what he later described as a “good set” of pre-marked tyres to clock a best time of 1:14.06s.

“We still need to do some work on the car,” said Van Gisbergen post-session.

“It’s not perfect but to be on top is definitely a good start.

“We had a fast car here last year so we know what a good car feels like.

“If we can get the same I’m sure we can go even quicker.”

Van Gisbergen ended up with the four best times of the 20 minutes, with his quickest a full 0.33s clear of second-placed Garth Tander.

James Courtney and Tim Slade added to Walkinshaw Racing’s strong start to the weekend in third and fourth respectively, while the Melbourne-based squad’s fourth car was sixth in the hands of Nick Percat.

Todd Kelly’s Nissan was best of the non-Holdens in fifth, with seventh through 10th was filled by Scott McLaughlin, Mark Winterbottom, David Reynolds and Jason Bright.

Red Bull duo Craig Lowndes and Jamie Whincup made a quiet start to their weekends in 11th and 16th respectively.

The session ran green for its duration, with a spin at the final corner for Lee Holdsworth the only notable incident.

The day’s second 20 minute practice hit-out will get underway at 1140 local time.

See below for full practice 1 results