Shane van Gisbergen’s strong form on the streets of Townsville continued with the Tekno Holden driver again clocking the fastest time in Practice 2.

With teams juggling two sets of pre-marked and one new set of the hard compound tyres today, Van Gisbergen stressed that the true pecking order won’t be made clear until later this afternoon.

“We tweaked up some stuff and it felt much better,” he said of the second session.

“I even did a long run at the end, which gives us a much better idea of the race style tomorrow.

“The next session everyone will be on new tyres I’d say. That will be a telling one but so far so good.” 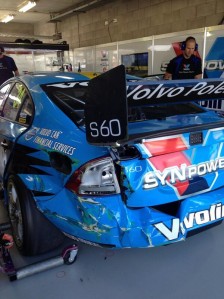 James Moffat shot to second quickest in his Nissan during the final minutes, with Garth Tander, Lee Holdsworth and Scott McLaughlin making it four marques in the top five.

Craig Lowndes was 13th in the second of the Red Bulls after failing to improve his previous best with a ragged final lap.

The red flags had been called after just five minutes due to a mistake from Robert Dahlgren that saw the #34 Volvo tag the wall at Turn 13.

The Swede was able to drive back to the pits, but rear-end damage ensured the car played no further part in the session.

“It didn’t feel that heavy, (but) it’s very, very annoying,” he said of the incident that has cost the rookie vital practice time.

It was also a difficult session for Brad Jones Racing, with Fabian Coulthard and Jason Bright 21st and 25th respectively.

Bright failed to complete a flying lap, with his team working to rectify brake problems ahead of the final 20 minute hit-out from 1250 this afternoon.

See below for full practice 2 results