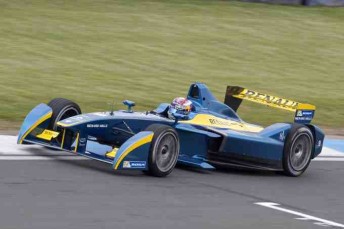 Audi Sport driver Lucas Di Grassi was just a little over half a second slower than Buemi, while Virgin Racing’s Sam Bird was third fastest.

“I’m more than happy to be honest,” said Buemi.

“I didn’t have any problems with the car at all and that meant we were able to learn quite a lot about it. It’s always nice to be P1 so let’s hope it continues.”

The championship’s 10 teams all took part in the session held at a bright and sunny Donington Park circuit, which included a temporary chicane at the exit of the Old Hairpin.

Daniel Abt was eighth ahead of Jaime Alguersuari while Mahindra’s Karun Chandhok completed the top 10.

Former F1 driver Jerome d’Ambrosio and sporstcar racer Antonio Garcia joined China Racing for the test. The squad are yet to unveil either of its drivers for the upcoming season.

Indy 500 winner Gil De Ferran finished 17th out of the 20 car field as he tested one of Andretti Autosport’s machines.

The first FIA Formula E test will conclude on Friday ahead of the opening round on the streets of Beijing, China on September 13.