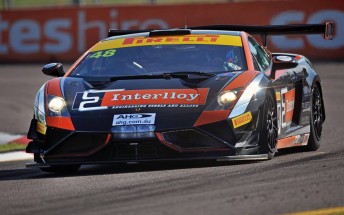 Richards hustled the Lamborghini Gallardo around the 2.86km circuit to claim the top spot with a 1:12.322s flyer.

The session to decide pole for the first of three 40 minute races was red flagged with Keith Kassulke’s Ascari suffering an electrical fire.

The Ascari, which had suffered from a misfire for much of practice, and has been ruled out for the weekend due to the damage sustained in the fire.