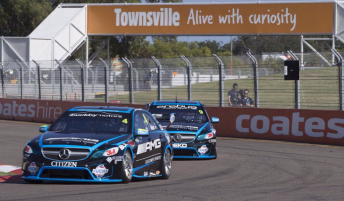 Erebus enjoyed a one-two in the third practice session

Lee Holdsworth led a one-two result for Erebus Motorsport in the final practice session of the day at the Castrol Townsville 500.

Holdsworth and team-mate Davison made the most of their new tyres in the closing stages of the 20 minute hit-out.

Scott McLaughlin improved from fifth to third with 1:13.79s on his own final lap.

Jamie Whincup ended up fourth, less than 0.1s adrift of Holdsworth, after briefly taking the top spot with just under five minutes remaining.

The day’s earlier pace-setter, Shane van Gisbergen, wound up a further 0.1s back in fifth.

Jason Bright rebounded from his troubled Practice 2 in sixth ahead of Walkinshaw trio Nick Percat, James Courtney and Garth Tander.

Mark Winterbottom completed the top 10 after another session that saw the championship leading Ford Performance Racing Falcon fail to threaten the top runners.

Robert Dahlgren’s Volvo returned to the track for Practice 3 following its incident earlier in the afternoon.

The Swede completed 11 laps to end up with the 22nd quickest time.

A fourth practice session is scheduled to take place from 1030 local time tomorrow.