Lowndes determined to bounce back

Lowndes determined to bounce back 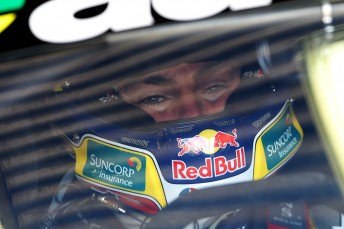 Craig Lowndes determined to atone for Darwin mistake in Townsville

Craig Lowndes has vowed to put his championship stocks back on track ahead of the weekend’s Castrol Townsville 500 at the Reid Park circuit.

Red Bull Racing Australia appeared to turn the corner in performance at the previous Darwin round with Jamie Whincup winning both Saturday sprints.

After finishing runner-up twice to Whincup, Lowndes let a prime opportunity to make inroads on FPR’s championship leader Mark Winterbottom slip when he clashed with Chaz Mostert, cutting a tyre and finishing 17th in Race 19.

“Obviously from me it was a mistake,” Lowndes told Speedcafe.com of the incident with Mostert in the 200km race where he qualified on pole.

“Very rarely with these tyres do you have contact and blow a tyre. But it happened. It’s just disappointing.

“Obviously we’ve set ourselves up and we had a brand new set of tyres for the end of the run.

“We calculated if it had all gone to plan we should have won the race.

“So they are the things that make you more determined to bounce back because we had all the factors right.

“I’m disappointed in myself but you can’t just linger on it. You’ve got to get over it.”

Lowndes said the all-hard compound tyre use across the Townsville weekend, comprising of 2x125km and 1x250km race, will suit the Triple Eight Commodores more so than the soft/hard mix used at Darwin.

“This weekend all you have to do is focus on getting that hard tyre to work,” Lowndes, who made a dramatic arrival at the circuit today in a tandem flight with world record holding hang glider Jon Durand, said.

“We are happy that it is a hard tyre and not a combo (mix of hard and soft).

“I think that they will obviously focus on a hard tyre set up to get it right for the weekend.”

Lowndes added that Triple Eight’s blunt attack in Townsville last year was down to set-up and says there is a greater understanding of how to extract better performance now, particularly riding the kerbs around the 13-turn track.

“The test day a couple of weeks ago we’ve definitely turned the corner. I think Darwin was a very good indication of that,” Lowndes said.

“This weekend I think it’s going to be the same. We’ve definitely got a better understanding of the car.

“There are more ingredients or more things we can do to the car that we now understand that will make a difference.

“I think the biggest thing around here last year was that we struggled to ride kerbs.

“That is something we thought we were okay but you follow other cars and they are riding kerbs far better than what you are.

“You realise you are highlighting an area we need to be stronger at and I think we will definitely be better in that area this weekend.”