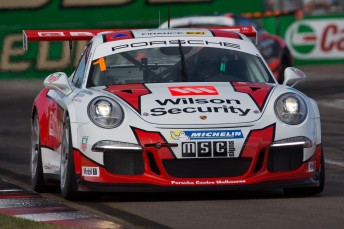 Craig Baird has started his weekend in the Carrera Cup on a positive note with the fastest time in practice on the streets of Townsville.

Despite being a multiple champion in the category, Baird experienced tough outings in Adelaide and Albert Park, before taking a race win at the mini-enduro event at Phillip Island.

Sitting third in the points standings behind Warren Luff and Steve Richards, a good round this weekend will go a long way to having him in the championship mix.

Richards was the pacesetter in the opening session from Luff and Baird, with track conditions improving for the afternoon session.

After taking the final race at Phillip Island with Nick Percat, Shane Smollen was the best in the Elite Category with Phillip Island round winner Stephen Grove next best from James Bergmuller in the opening session.

Smollen repeated that effort in the afternoon session once again from Grove, with Marc Cini setting the third best time.

Teams face qualifying first up tomorrow morning at 7.45am, followed by the opening 17 lap race of the weekend at 11.30am.