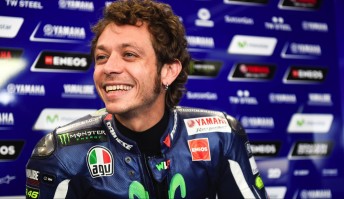 Valentino Rossi will remain with Yamaha until the end of 2016 after agreeing a new two year contract with the Japanese marque.

The seven-time MotoGP champion had hinted earlier this season that he intended to stay in the category with Yamaha for another two years.

After securing only six podium finishes last season, the 35-year-old Italian has enjoyed an impressive start to the 2014 campaign that has seen him dominate his Yamaha team-mate Jorge Lorenzo.

His head turning display has helped him to second spot behind the all conquering Marc Marquez in the championship standings.

Rossi, who has won four of his MotoGP titles with Yamaha, says the new two year contract with Yamaha is the ideal outcome for his career.

“I am very proud of this announcement,” said Rossi.

“It’s very important to me because I really enjoy working with my crew and all the guys from the team, both the Japanese and European members that have been with me almost my entire career.

“It’s great because this was my target; I wanted to continue, I am feeling good and I’m motivated to keep giving my best.

I am very happy that I can keep riding my YZR‐M1, that has been my love for so many years and will still be my love this year and the following two seasons.”

The MotoGP season continues at Germany’s Sachsenring circuit on July 12-13.