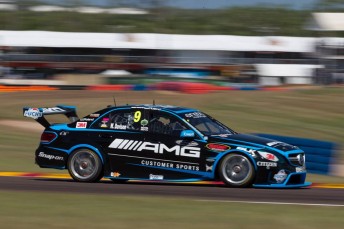 The Erebus entries will again compete with AMG signage this weekend

As previously reported, supporters of cryptocurrency Dogecoin had been rallying to sponsor Erebus’ Lee Holdsworth driven Mercedes-AMG for the Castrol Townsville 500.

Following strong initial support for the effort, the community proved unable to hit the $50,000 USD title sponsorship or $20,000 USD bonnet sponsorship targets set by the team.

Although talks could still have seen the Dogecoin logo appear on the rear quarters of Holdsworth’s entry, both parties are said to have agreed to postpone the concept until later in the year.

“The target wasn’t reached and with something like this, when there’s more than one person or one entity involved, it’s important that you do it correctly and in a way that all of the parties are happy with,” Erebus’ commercial manager Jeff Reibel told Speedcafe.com

“It couldn’t be done (properly) just by putting a rear wing or rear quarter out there. So what we’ve done is put it on hold.

“I’m going down to visit them (Dogecoin representatives) in Melbourne in a couple of weeks time to see what we can do for later on in the year.

“We want to keep it alive and both parties have agreed on that so we can keep on planning through with it.”

Reibel confirmed that Erebus Holdsworth and Will Davison driven entries will again campaign the AMG Customer Sports logos this weekend.

Although not indicative of funding from AMG, Erebus was permitted to run the logos for the first time in Darwin two weeks ago as the parties continue to discuss a deal beyond the current season.

The squad also continues to work on its engine upgrade package, which will remain absent from its cars in Townsville.

The 31-year-old is hoping that the variables in the race format, which this year sits at two 125km and one 250km races, will help his new team score a strong result this time around.

“It’s one of those circuits that provides good racing and always the opportunity for different strategy, particularly this weekend with the new street format that we used in Adelaide,’’ said Davison.

“That’s certainly going to spice things up. It’s limited with tyres with only five sets so how everyone manages that over the course of the weekend is going to be interesting.

“It’s one of the more physical tracks – in the top two or three, if not the most physical circuit on the calendar so adding on an extra 50km is going to make for an interesting weekend.

“I’ve had some memorable races (in Townsville) over the years and I’m really looking forward to extracting the most out of our package this weekend and to see if we can get some good race results.

“It’s been a tough few events in Perth and Darwin so I really want to bounce back and post some good results.’’

Holdsworth and Davison sit 13th and 15th in the V8 Supercars Championship respectively after 19 races.