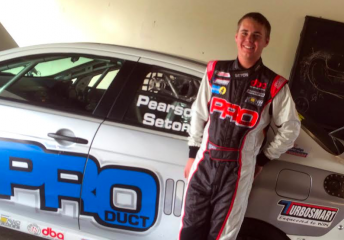 Aaron Seton with the Pro-Duct Lancer

Third generation racer Aaron Seton is on the verge of securing his circuit racing licence to follow in the footsteps of his famous father and granddad.

Young Seton turns 16 today (July 2) and will be thrust into the national spotlight alongside his dad Glenn at the next round of the Australian Manufacturers Championship at the Shannons Nationals from July 11-13.

Barry ‘Bo’ Seton, who won the 1965 Armstrong 500 at Bathurst with Midge Bosworth, will also be part of the effort at Sydney Motorsport Park, where Aaron will join regulars Glenn Seton and Bob Pearson in a Mitsubishi Evo 10.

In what feels like a touch of de ja vu for the Seton family, Aaron will be a year younger than his dad when he made his national circuit debut.

Glenn Seton, who was tagged the ‘baby-faced assassin’ early in his career, was 17 when he drove a Capri in his first Australian Touring Car race in 1983 before teaming up the same year with Bo in the MkIII Capri at Bathurst.

Aaron has spent nine years in karts and has enjoyed several test outings in the Evo ahead of the Sydney race.

“He’s done at least four test days and speedwise he’s not that far away from me,” Glenn Seton, a two-time Australian Touring Car Champion, told Speedcafe.com.

“He hasn’t thrown it off the road once yet and that’s a very good sign of having good pace and being pretty consistent.

“So there’s a bit of a plan to give him a bit of a trial then in most things.”

Aaron is set to enjoy several outings in Pearson’s Evo, in which Glenn has been a regular driver over recent years.

“Bob (Pearson) has taken him under his wing and has given him a car to run around in the Production Car Series at state level in NSW as well as doing the Nationals,” said Glenn.

The three generations of Setons will represent six decades of racing in the family with Bo commencing his racing career after being awestruck with cars racing around the Warwick Farm circuit in Sydney in 1961.

“I’m flying Bo down from the Gold Coast to be a part of the weekend,” Glenn added.

“There’s only once in your lifetime you get this opportunity with kids and grandkids. It’s what we’ve done all our life so it’s pretty special.”

The plan for the AMChamp 4-hour meeting at SMP is for Seton and Pearson to book-end 90 minute stints with Aaron slated for the middle running.

Glenn Seton and Pearson won the most recent round of the AMChamps at Phillip Island in May, leaving them fifth and sixth respectively in the Class A championship standings.

The Pro-Duct Evo will compete in the ‘invitational’ Class I in Sydney however, as CAMS rules state that a Provisional license holders cannot race in Class A.