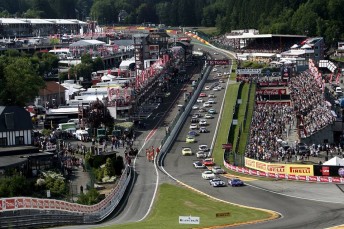 A bumper field is again expected for the Spa 24

Muscat and Erebus general manager Barry Ryan have been placed in the team after the Australian squad elected against fielding its own car in the event.

The move marks a return to Spa for Ryan, who also worked for Black Falcon at last year’s race.

The July 23-27 event will enjoy a high level of Australian interest with Craig Lowndes set to line-up for Ferrari team AF Corse, and V8 Supercars co-drivers Steven Richards, Steve Owen and David Russell teaming with Roger Lago in his Lamborghini.

A 63 car field of GT3 machinery is expected for the race, which is part of the Blancpain Endurance Series.

“It’s going to be an ideal opportunity to compete on the world stage against some of the best GT drivers on the planet,” said Muscat, whose entry will compete in the Pro-Am class.

“We’ve been looking at a range of options to contest more GT style events, specifically endurance races, and join a competitive team and gain some valuable race miles.

“What better opportunity is there than to drive with one of the best SLS AMG customer teams there is? 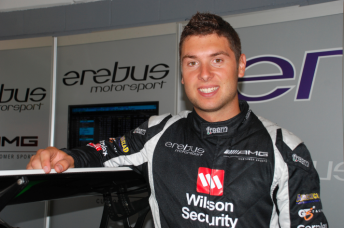 “Black Falcon were quick last year, and have won some of the major GT3 events around the world over the last 18 months.”

Muscat will undertake a packed schedule over the next month that will include learning the Spa layout in a Radical SR3 and later making a maiden appearance in the Carrera Cup Great Britain.

The Melbourne-based driver will test a Redline Racing-prepared Porsche in the UK on July 18 before the Snetterton race meeting on August 1-3.

Muscat dominated last year’s GT3 Cup Challenge in Australia before graduating to the AGTC and is confident of a strong showing first time out in the British championship.

“I enjoyed driving the Type 997 and had some valuable experience in that, both in GT3 Cup Challenge and also during my two runs in the Carrera Cup (Australia) car last year, so I’m expecting to adapt to the Porsche quite quickly,” he said

“My goal is to make it onto the podium.”

Muscat and Erebus will this weekend be part of a 25-strong field for the third round of the 2014 AGTC season in Townsville.

Muscat leads Bowe and the absent Peter Edwards by 25 points in the standings heading to Townsville, with Klark Quinn (McLaren) a further 14 points adrift in third.