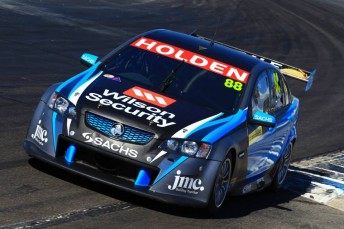 Paul Dumbrell heads to Townsville second in the Dunlop standings

Paul Dumbrell is out to make up for lost ground in the Dunlop Series this weekend after an enforced absence from the final race of the previous round in Perth.

The former Bathurst winner flew out of Barbagallo on Sunday morning of the race meeting in order to attend an Automotive Brands conference in Melbourne.

“We knew we had that clash before the start of the season, it was just one of those unfortunate circumstances,” Dumbrell told Speedcafe.com ahead of this weekend’s Townsville round.

“Unless I break a bone or get sick, I’ll definitely be at all the rest of the races for the remainder of the year.

“We had a good day on the Saturday in Perth so hopefully we’ve turned a corner in terms of unlocking some more speed from the car.”

This year marks Dumbrell’s busiest season of racing since stepping back from the V8 Supercars Championship at the end of 2011 in order to focus on his role of CEO at Automotive Brands.

The 31-year-old is in contention to join Steve Owen and Dean Canto as a two-time winner of the second-tier series, having enjoyed success in the class during 2002 before graduating to the main championship.

Although stressing that his primary reason for rejoining the Dunlop class is to prepare for his Pirtek Enduro Cup commitments with Red Bull Racing Australia and Jamie Whincup, Dumbrell expects to mount a strong challenge for the title from here on in.

“The first plan was only to do two or three rounds, but considering we’re doing the whole year, bar one race, we absolutely expect to be there or thereabouts at the end,” he said of the title battle.

“Unlike Adelaide (where Dumbrell benefited from a collision between Cameron Waters and Walsh to win Race 2 and the round), in Perth we had a car that could win a race on its own merits.

“Yes, we’ve got to improve qualifying, which is something that I’ve got to do, and then we’ve got to race smart and improve our tyre life.

“Up against a couple of young guys coming through in Ash and Cam, it’s actually quite good fun. The competitiveness in the series now is really tough,” he continued.

“I think if we can be near the front week in, week out, it’ll be a good job from myself and the whole team.”

Dumbrell, who like all co-drivers does not have the benefit of Friday practice running at race meetings in the lead-up to the enduros this year, joined Red Bull for its test day at Queensland Raceway last month.

Only enjoying a brief run in Whincup’s car due to the team’s heavy performance testing schedule, Dumbrell said the recent miles in the Dunlop Series helped him feel immediately comfortable.

“After Bathurst in 2012 I don’t think I drove at all until (the co-driver practice session in) Townsville the following year,” he said.

“Seven or eight months not being in the car was tough.

“Even at the test I wasn’t as anxious to get in the car because I’ve already done plenty of miles.”

This year marks Dumbrell’s third as an endurance co-driver alongside long-time friend Whincup.