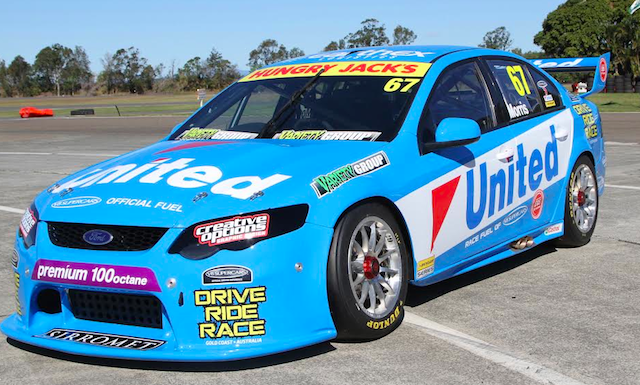 Paul Morris’ Dunlop Series Ford will compete in the colours of United Petroleum for the remainder of the season.

United, which is Australia’s largest independent fuel retailer, took over from CSR as the official fuel supplier for the V8 Supercars Championship and Dunlop Series this year. “This is an extension of our existing involvement in V8 Supercars and is really a perfect opportunity to expand the leverage of our involvement in the sport,” said United Petroleum’s head of marketing, Andrew Luxton, of sponsoring the second-tier V8 Supercars entry.

“Paul is one of the biggest personalities in the sport and is a proven front-runner.

“We’re also extremely happy to be on board with the Performance Driving Centre and the V8 Supercars Official Driving Experience as the official fuel supplier.”

Morris sits fourth in the Dunlop Series standings ahead of this weekend’s fourth round of the season in Townsville.

The 46-year-old scored a race win at the Reid Park street circuit last year and says he’s looking forward to another competitive showing.

“Townsville is a place that I always enjoy racing,” he said, having switched from an ex-Lucas Dumbrell Motorsport Triple Eight Holden to an ex-Dick Johnson Racing Triple Eight Ford over the off-season.

“There’s a great atmosphere at the event (and) you really get the chance to get the elbows up around the tight street course.

“Traditionally, I’ve done well there. It would be great to follow up our race win there last year in United Petroleum colours this weekend.”

United is also the official fuel supplier of V8 Supercars