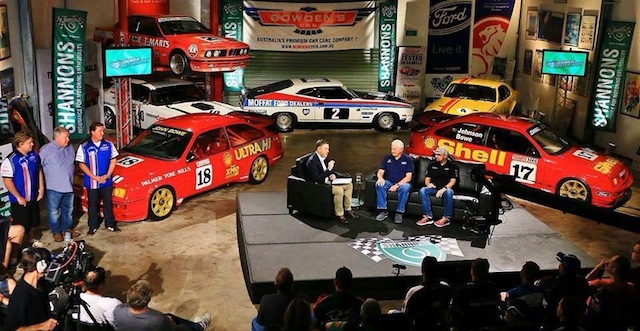 Filming of the program taking place at Bowden’s

A new series documenting some of the greatest moments in Australian motor racing will be launched on July 19.

Called the Shannons Legends of Motorsport, the 12-part series will be broadcasted on 7mate and co-hosted by Neil Crompton and Aaron Noonan.

The hour long episodes promise to uncover rare footage from the Seven network’s archives dating back to the broadcaster’s first foray into domestic motor racing in the 1960s.

“The Shannons Legends of Motorsport is a very exciting project for me,” Crompton said.

“It blends wonderful historic imagery from Seven’s library with iconic racing cars plus the legends that drove them.

“Some of the material we’ve found is fantastic and in many cases, long forgotten and the back stories are fascinating.”

Filming has already been conducted at David Bowden’s acclaimed collection of Australian motorsport cars on the Sunshine Coast and the National Motor Racing Museum at Bathurst.

A third and final filming session to be held at Shannons Auctions in Melbourne.