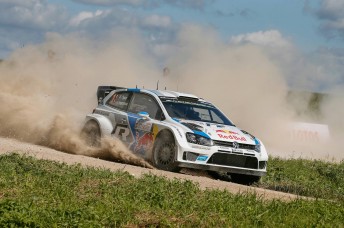 Sebastien Ogier has won Rally Poland and also took maximum points by finishing the event with the Power Stage victory as well.

It is the world champion’s fifth win of the seven events contested so far this season, and in a good weekend for Volkswagen Andreas Mikkelsen was second overall.

After two tight opening days of competition, Ogier cleared out yesterday to just over a minute. He kept things in check throughout the opening stages of the final day and then attacked on the 14.9km Power Stage. He now heads the driver’s standings by 50 points from VW team-mate Jari-Matti Latvala.

“I’m really happy and a good step for the championship,” said Ogier. “I had a lot of fun as the stages were really nice this weekend. High speeds and I really enjoyed driving my Polo here.

“I knew on the first day I had a big disadvantage with my road position. But I knew that if I could carry the level of commitment on the second and third day it would make the difference, and that is what happened.”

A pleasing event for Hyundai with Thierry Neuville finishing third for the second time this year, while team-mates Juho Hanninen was sixth and New Zealand’s Hayden Paddon in eighth.

“All in all a good weekend and we have learnt a lot,” said Paddon.

“A good weekend for the team and all three cars have run strong which is important.

“We made a big jump since the last round in Sardinia and we need to make the same improvements for Finland.”