Ogier clears out in Poland

Ogier clears out in Poland 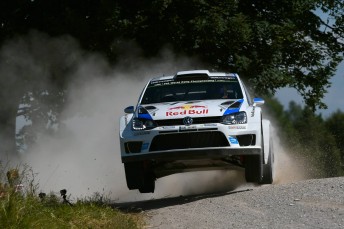 Ogier in control in Poland

Sebastien Ogier will take a 61-second lead into the final day of Rally Poland as the world champion put the hammer down and his challengers encountered a range of issues.

After starting the day less than a second in front of fellow Volkswagen drivers Andreas Mikkelsen, the Frenchman attacked when he needed and was cautious on other sections of the ultra-fast gravel rally.

“It’s been a good day for us. We just need to focus on getting to the finish now,” Ogier said.

Mikkelsen slipped firstly on the second stage of the day losing 10 seconds with a spin. Then brake issues later in the day appears to have put him out of the fight with Ogier. 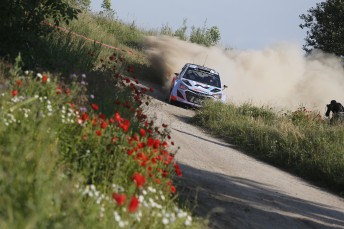 The first run through the 35.17km ‘Goldap’ test took its toll with Kris Meeke (Citroen), Robert Kubica (Ford) and Henning Solberg (Ford) all suffering punctures, while Jari-Matti Latvala (VW) damaged suspension when he hit a large rock. It was worse for Elfyn Evans, who retired after destroying the front-left suspension in his Ford, while Citroen’s Mads Ostberg joined him on the sidelines when the same rock tripped and rolled his Citroen.

Kubica day ended three stages later when he took the right-rear wheel off his Ford. ““It has been a very tricky day for us,” said the Polish star. “When we were staying on the road it was fun to drive but lately we have been haunted by hidden stones.”

Through it all came the rise of Hyundai with Thierry Neuville in third place, Juho Hanninen in fifth and Kiwi Hayden Paddon in seventh.

“The car has been good but we still have lots to learn,” said Paddon.

“I’m fine in the smoother stages but when it’s rougher with ruts, like in the long Goldap stage, I struggle.

“I have to learn how to drive in these conditions but that’s part of our objective for these rallies. For the team to have all three cars at the end of Saturday and in the top seven is a very promising aspect of our day so we will be hopeful of more improvements tomorrow.”

After a frustrating first two days of the rally where he was not in-sync with his pacenotes, Mikko Hirvonen sits fourth while Latvala recovered to be sixth.