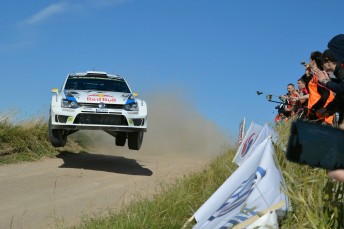 Ogier is in a tight battle at the front in Poland

Sebastien Ogier is less than a second in the lead from Volkswagen team-mate Andreas Mikkelsen after the second day of Rally Poland.

A battle raged throughout the day, which included stages across the border in Lithuania.

Normally being first on the road would be a major disadvantage, but with heavy rain prior to the event, the stages cut up quickly and along with spectator control issues, even forced the cancellation of two tests in the afternoon.

Throughout the day the lead went back forward four times, with the world champion grabbing the overnight lead on the final Mikolajki super special to head to his Norwegian team-mate.

Mikkelsen more than pleased to be well and truly in the fight heading into the third day’s 10 scheduled stages.

“I really enjoying driving on the stages today,” said Mikkelsen.

“The feeling is great. If the same feeling is there tomorrow, we will try to keep the pressure on.”

Mads Ostberg moved into third place earlier in the day when the road conditions became an issue for those behind. The Citroen driver is 18.6s behind Mikkelsen, but 12.5s ahead of Jari-Matti Latvala (VW).

Kris Meeke (Citroen) started the day in third but slipped to fifth after battling the rutted roads.

“It’s frustrating when there’s nothing you can do with the ruts,” Meeke said.

“They must be a foot deep after only seven cars. It’s terrible.” Hayden Paddon is knocking on the top-10

Next is Hyundai’s Juho Hanninen then Mikko Hirvonen (Ford) and Robert Kubica who is charging back from a roll on the opening day. Elfyn Evans got the better of Thierry Neuville in a last stage battle for ninth place.

New Zealand’s Hayden Paddon was the surprise package of the morning opening stage as he stormed to second place in SS4 just 0.7s from taking a maiden stage win. It was an impressive performance in the Hyundai i20 WRC but he face the rough conditions on the next two stages. It was unfamiliar terrain but he did everything needed to in order to get the car to the finish and will start Saturday from just outside the top ten in 11th overall.

“I have been feeling comfortable in the car during the smooth stages and could get up to a good low-risk speed,” said Paddon.

“I was pleased to set the second fastest time in this morning’s first stage considering we still had pace in hand. The following two stages could not have been more different. We struggled in the two rough stages (SS5 and SS6) and I lost confidence.

“Tomorrow’s stages are more like the ones we did well on today so I hope we can be competitive.”