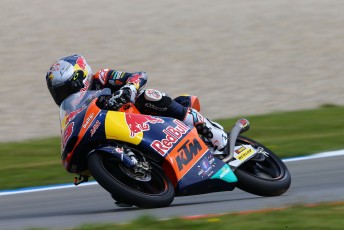 Rising Australian motorcycle star Jack Miller continues to lead the Moto3 standings despite suffering a crash while leading at Assen.

The Townsville rider had secured pole position for the eighth round of the championship but drama struck at the start of lap two.

Miller made a strong start from the front row of the grid to lead the field as they streamed into the first turn.

However, after building a gap over the chasing Alex Marquez he dropped his Red Bull KTM at Turn 1 at the start of the second lap.

Luckily the Aussie escaped the incident without injury.

Marquez went on to take the victory from Alex Rins and Miguel Oliveira, while Miller’s title rival Romano Fenati finished outside the points in 18th position after suffering two crashes.

As a result of Fenati’s problems, Miller will leave Assen with his seven point championship lead intact.

“Fortunately we are still at the top of the standings, but we have to do well at Sachsenring,” said Miller.

“My foot is fine; thankfully it was protected because it was struck by the rear tyre. I had to push the bike off me. I was lucky not to have suffered any serious injury.”

The Moto3 championship heads to Germany’s Sachsenring circuit for the ninth round of the series on July 13.