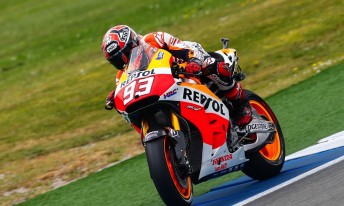 Marc Marquez storms to eighth victory of the season

Marc Marquez overcame changeable conditions to come from behind to claim his eighth victory of the MotoGP season in Assen.

The reigning world champion led from the start but a mid race rain shower forced the riders to swap bikes forcing him to surrender his early lead.

Marquez was left to chase down Ducati’s Andrea Dovizioso with the Spaniard pulling a crucial move for the lead with just 10 laps remaining, before going on to cruise to the chequered flag.

Dovizioso was left to settle for second ahead of Honda’s Dani Pedrosa in third. Polesitter Aleix Espargaro was fourth while Yamaha’s Valentino Rossi was fifth.

Australia’s Broc Parkes made the most of the conditions to power from 19th on the grid to a best result of the season in 11th position. The Paul Bird Motorsport rider had been riding as high as seventh spot.

Officials delayed the start due to wet conditions before a wet race was declared.

Once underway it was Marquez who led the field initially but he briefly lost the position to Dovizioso on the opening lap.

Espargaro slotted into third spot while Nicky Hayden was the big move as he rocketed from the final row of the grid to 12th position in the early stages.

A dry line soon started to appear which eventually forced the majority of the field into the pits to swap bikes and crucially make use of fresh slick tyres.

However, the move seemed premature after Marquez ran wide on his new rubber and was lucky not to fall off his Honda.

Yamaha’s Jorge Lorenzo stayed out for a couple laps before he made the call to enter the pits to change bikes.

Following the flurry of pit-lane activity Dovizioso emerged in the lead with a three second advantage.

Marquez soon settled into a rhythm as he closed in on the Ducati in the lead and with just 10 laps remaining, he leapt into the lead.

Once in front Marquez powered on to a comfortable victory to extend his lead in the championship to 72 points.

Dovizioso soldiered on to come home in second while Pedrosa overcame a scrap with Espargaro for the final spot on the podium.

Ducati’s Cal Crutchlow and Stefan Bradl rounded out the top 10, while Lorenzo was left to settle for 13th position.

The MotoGP season continues with a visit to Germany’s Sachsenring circuit for round nine on July 13.