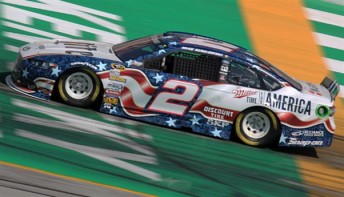 Three poles for Keselowski so far in 2014

Brad Keselowski has won the Coors Lite Pole for the Quaker State 400 in Kentucky.

“We’re right where we want to be, starting first is a great start but it’s just that it’s just a start,” said Keselowski.

” You still have to execute a race and by no means a guarantee of a win, so we’ll want to go out there and earn that Saturday.  But we’re right where we want to be in that sense, so we’ll keep pushing forward and I’m just taking a second to reflect on the efforts of our team and how proud I am of that and without them we couldn’t be here.”

The two-car outfits of Team Penske and Chip Ganassi Racing both got their drivers into the final round of qualifying for the top-12. Stewart-Haas Racing had three of its four drivers in the top-12 with team boss Tony Stewart missing the cut. 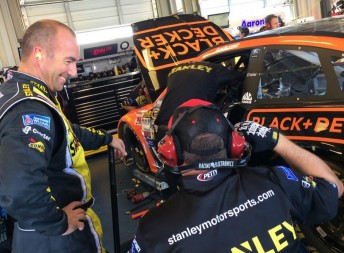 Ambrose with his Black & Decker ride this weekend

All 24 drivers who advanced to the 10-minute second round broke the old track record of 183.636 mph, set just last year by Dale Earnhardt Jr.

Jimmie Johnson (25th) and Earnhardt Jr. (29th) did not advance out of the opening 25-minute round, likewise Marcos Ambrose who will start 27th.

“The car was free getting in and then tight in the centre, but we have been working on the car all day,” said Ambrose.

“We really showed some speed in the second practice and were near the top of the speed charts, but need to be more consistent. We just need to work hard tomorrow night.”

One other note from qualifying was that only 42 cars turned up to race. The field is capped at 43 and on most weekends some cars fail to make the field. It is the first time since 2001, when the re-scheduled race at Loudon occurred after the September 11 bombings, that a race will start with less 43 entries.