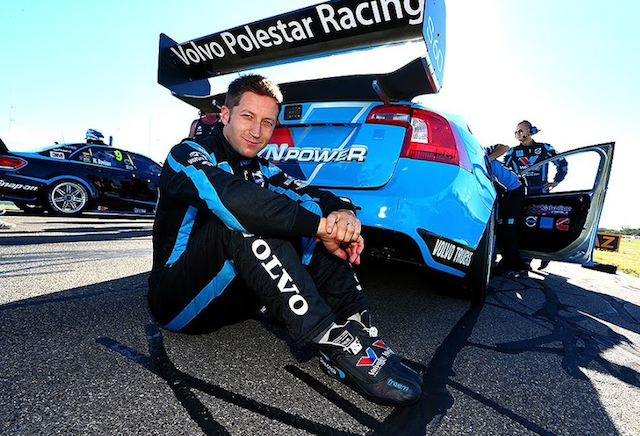 Volvo’s Swedish import Robert Dahlgren is confident that top 10 finishes are not far away despite a rough start to his rookie V8 Supercars season.

The 34-year-old Dahlgren sits at the bottom of the points standings after 19 races, yet to score a top 15 finish.

While Scott McLaughlin has been the category’s pace-setter on the way to a class-leading qualifying average of 4.4, Dahlgren has largely struggled, averaging 16 grid positions below his team-mate.

The former Scandinavian Touring Car Championship driver’s bid to get up to speed in the unique Australian cars has to date been hampered by technical problems with his #34 Volvo.

Dahlgren’s car has endured the worst of the S60’s teething troubles including last weekend at Hidden Valley, where the Swede missed much of practice with electrical issues and eventually bowed out of Sunday’s encounter with a stuck throttle.

Acknowledging that the unreliability hasn’t helped his cause, Dahlgren is convinced that he remains on track for a strong second half of the season.

“I’m close enough that I feel and I know that the speed is there to be in the top 10. That’s where we should be,” he told Speedcafe.com.

“We’ve shown that speed in the last couple of races but for various reasons it’s not happened.

“But I’m starting to feel more and more confidence in the car that means I can race harder with the guys.

“I think you’ll see a couple of top finishes in the coming races.”

A front-runner in the STCC, Dahlgren admits that his position at the back of the V8 grid has been well below his own expectations.

“Before I came here… you always think you are going to be better than running at the back of the field because that’s not what I came for,”he said.

“I knew it was going to be tough but I’m alright with taking time.

“Now I’ve learnt how different people race and so on and I think I’ll start to move forward.

“From my point of view that’s what I have to do.

“I haven’t had any pressure from the team or anything but it doesn’t matter what pressure they put on me because I put more on myself.”

Upon the announcement of his signing to the team in January, Dahlgren stressed that he’d be “happy to walk out of the door” if he’s not performing in V8 Supercars.

While talks about 2015 have yet to start with the team, the former British F3 runner maintains that they won’t be a “one-way” conversation.

“I only want to be here if I have something to do in terms of adding something to the team and performing,” he said.

“Otherwise I don’t want to be here anyway.

“But I think I’m starting to do that now and very shortly we’ll start to see a couple of top 10s.

“You’ll hear a bit of “it’s about time” but the way I go about racing I do it very methodically and try to take it step by step.

“I don’t want to crash about and punt people off trying to get positions in one race. I want to know that when I’m there I’m there to stay.

Striving to learn all he can from his younger team-mate, Dahlgren demised any suggestion that the star driver was taking the majority of the team’s focus.

“I have really good mechanics and really good engineers, so I’m happy,” said Dahlgren, whose crew includes a Swedish mechanic placed in the team by Polestar.

“If it (the mechanical problems) keep happening I might have a different answer but for now it’s just been a short period of time that I’ve had a few issues.

“The team is doing what it can to solve each issue.”

Dahlgren is the only full-time international in this year’s V8 Supercars Championship following the exit of German Maro Engel and Frenchman Alexandre Premat.

Premat, who Dahlgren replaced at Garry Rogers Motorsport, will rejoin the team for the Pirtek Enduro Cup, where he’ll partner McLaughlin.