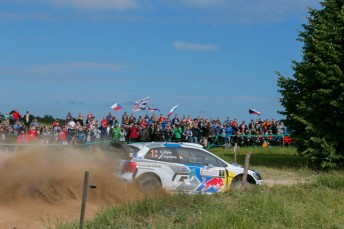 Sebastien Ogier has jumped out of the blocks to hold a narrow lead after the opening day of Rally Poland.

Despite being first on the road, the world champion heads another Volkswagen, but it’s Andreas Mikkelsen and not Jari-Matti Latvala that holds down second place. Ogier was fastest on two of three stages which covered 34.38km of competitive kilometres.

“I’m happy with the start of the rally and I couldn’t do any better. Tomorrow we will have to continue at this high rhythm and I’m looking forward to it.” 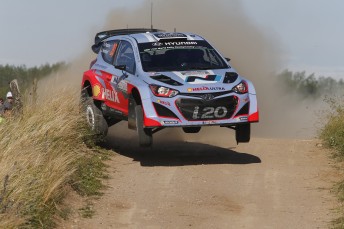 Kris Meeke had a good opening day to have his Citroen in third place. Hyundai’s Juho Hanninen was the other driver to record a stage win and sits in fourth.

Next is Mads Ostberg (Citroen) followed by Thierry Neuville (Hyundai i20) and Kiwi Hayden Padden in seventh ensuring Hyundai’s solid start to the event.

“We have had a good start to the rally in terms of times even if I feel that there is still room to improve my driving,” said Paddon.

“The car has been fantastic and I could get into a rhythm. Our focus is to get through the stages and to accumulate data and information for the team.

“It’s good to be driving here in Poland and tomorrow also in Lithuania.”

Paddon is ahead of Latvala who is 24 seconds off the lead after being far from happy with the handling of his VW. Also down the order is Ford’s Mikko Hirvonen, who said he lacked confidence in his car.

Big things were expected of local hero Robert Kubica who was fourth after the opening stage. He dropped to 12th at the end of the day after a roll-over cost him 28 seconds. It could have been far worse if not for the massive turn-out of spectators who got him back on his wheels and back into the action.