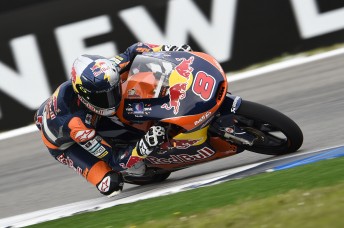 Australian Moto3 star Jack Miller has secured his fourth pole position of the season with an impressive effort in qualifying at Assen.

The 19-year-old from Townsville saved his best until the final minutes of the session when he produced a 1.42.240 at the Dutch circuit to claim pole. Miller’s effort broke the category record at the venue.

Miller’s title rival Romano Fenati could only manage ninth on the grid.

Having set an impressive pace in free practice and qualifying, the Moto3 championship leader is confident about his chances in Saturday’s race.

He also believes his Red Bull KTM squad have solved the chatter issues which plagued him in Catalunya two weeks ago.

“The truth is I am very happy with the way we achieved this pole position and how we have been riding so far,” said Miller.

“The bike is working incredibly well. I can’t thank the team enough for the work that they’ve done.

“Some of the chattering problems we had at the last race came from my riding, and we have solved this.

“At Aragon (test) we were able to work on these issues, improve them and implement the improvements here at Assen.

“Our pace is very good and we hope to continue the same tomorrow in the race.

“It will be difficult to escape from the pack, but I feel I can do it, so we’ll try.”

Miller holds a seven point lead in the Moto3 standings ahead of Saturday’s eighth round of the season.